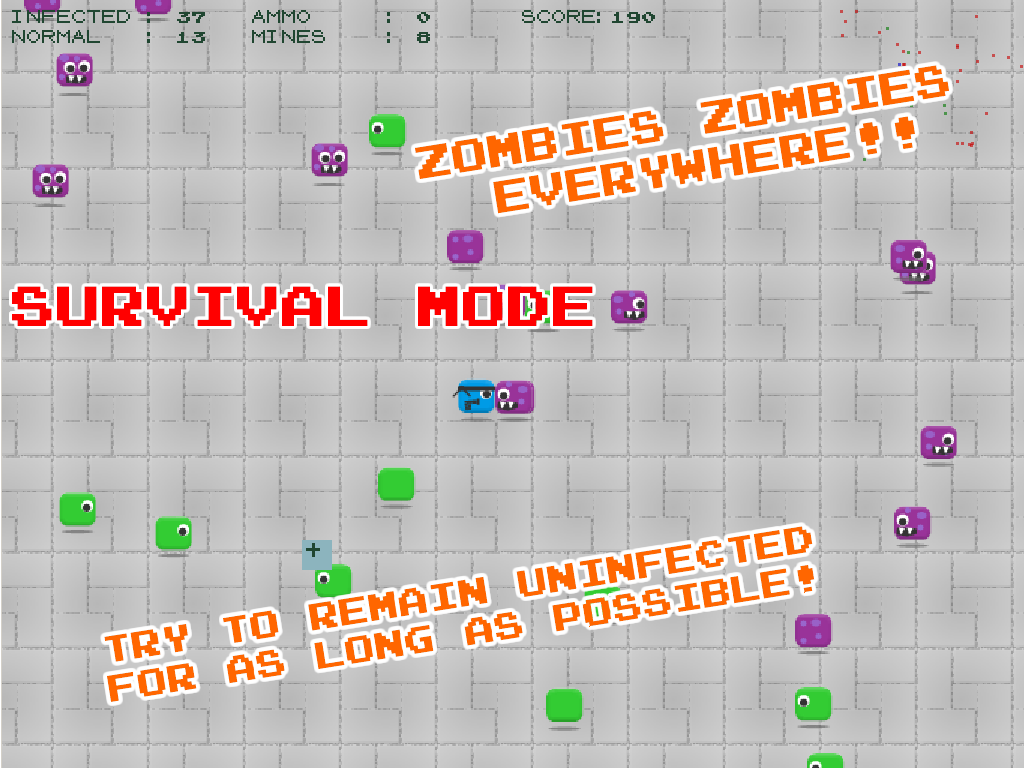 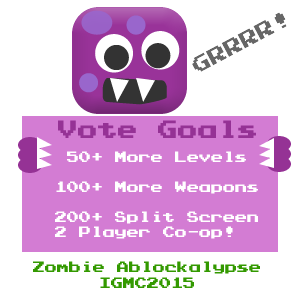 ARRRGGH! Marines, Get Ready - Blast, dodge use tactics, strategy and quick reflexes to get the infection under control in this fast furious dual control action-fest where no one dies! Your name is Private Joe Blockhead of the Block Marines and your lands are under threat!

A Zombie Virus has taken hold and and it's spreading fast!

You and many other of the Block Marines have been tasked with removing the infection from all the zones of your land.

Your team of scientists have come up with a cure in pellet form,  but it only lasts as long as the subject does not get re-infected!

Other marines have left behind some weapons and equipment for you to find hidden with the block walls of the town.

Ammo and mine drops will be carried out to re-supply your efforts.

Occasionly you can recruit a green civvie to join the ranks and help defend an area.

Shooting blocks gives you mini blocks that you can use to create small cordons or blockades against the infection.

Voting:
You have to create an account before you can vote.
* Clicking on "vote" will redirect you to a register page and vote will not be cast unless you login to your newly registered account.
You should see message "Your vote has been cast successfully!" otherwise hit back on browser and try again

There are two game modes of play. Maybe even three if I have time.

1) Arena / Ablockalypse mode (survival mode) is just you and your gun and whomever you can recruit to help you. Fighting to stay alive and score as much as possible until the Zombies have been all been cured or until you are defeated! No Block builds are allowed in Survival Mode.

2) Town Clearance Levels: Using the blocks and resources available in the town, you must defeat the infection using strategy and tactics.

Use everything you can, if you wanna remain uninfected!

The virus spreads rapidly ('growing' in numbers) and

each newly infected Zombie will try to infect others and the

infected enemies 'grow' in size the longer they remain infected.

Gary Plowman is the Founder of Gazzapper Games. We are Based out of Dublin, Ireland and currently have a number of arcade retro games on the Google Playstore that have a large number of players. Our titles are approaching 1 million downloads so far. Follow me for more Updates ... http://twitter.com/Gazzapper

All assets are original and were created just for this contest :)

BTW - All SFX were done using my voice :)

My Other Playstore Titles