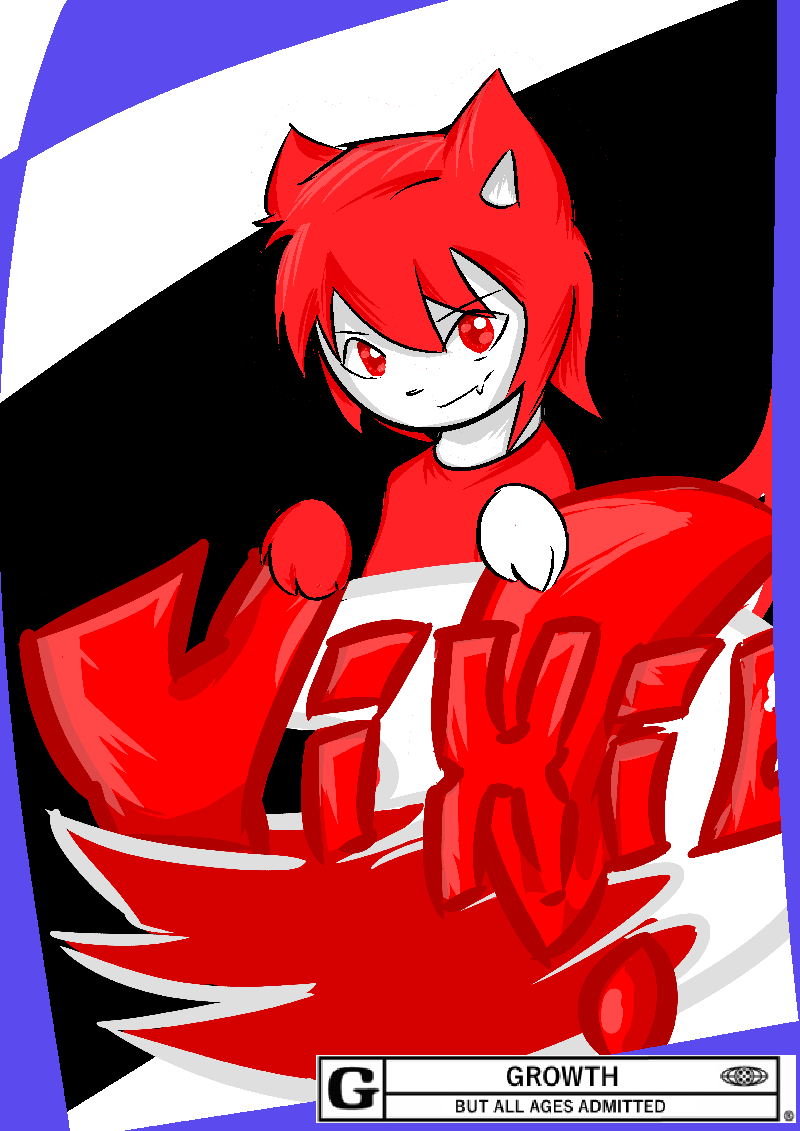 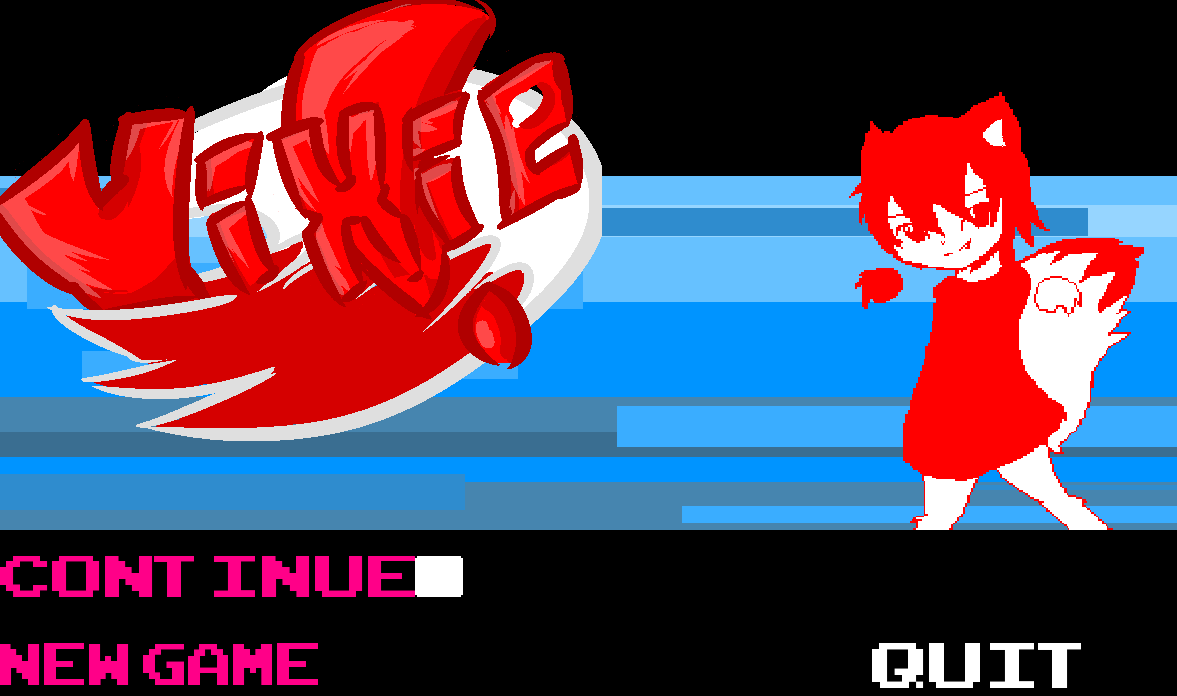 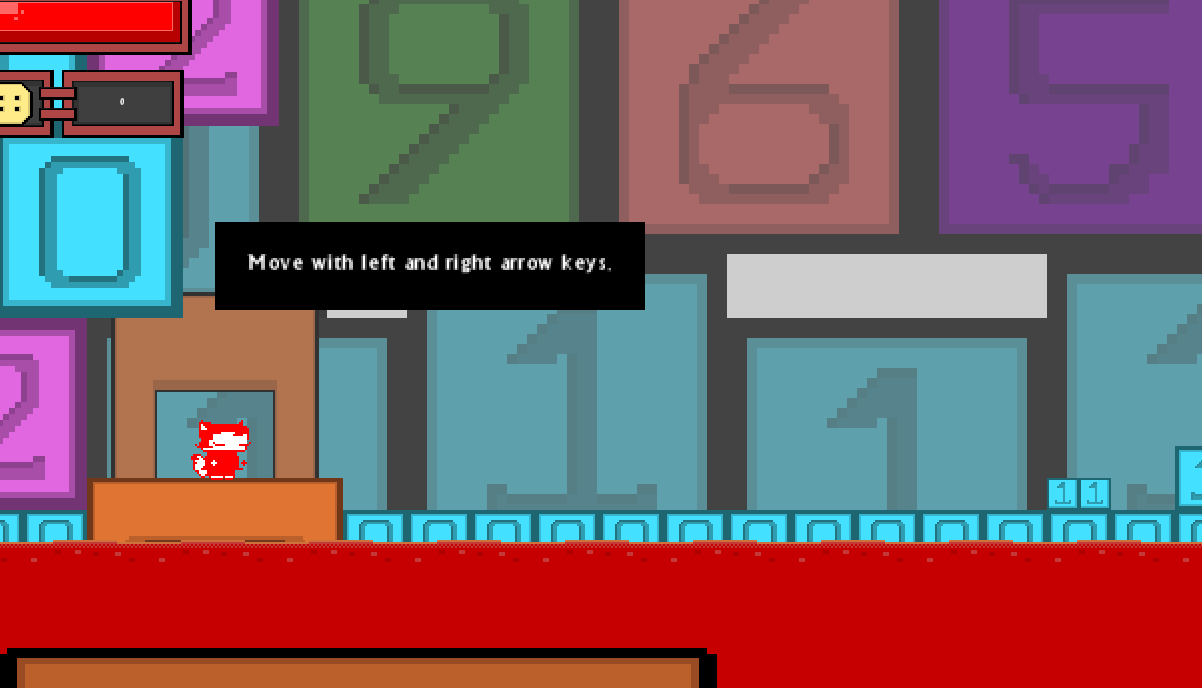 Vixie is a young fox who sees the world through the childish eyes we all once had. When Vixie's best friend, Dusty, suddenly disappears, she sets out on a quest to find him.

*IMPORTANT* You can save the game by interacting with the computer in Vixie's bedroom!

Vixie! is platformer game that utilizes running and active wall-jumping to bypass obstacles. The traditional "lives" system was scrapped. Instead, Vixie! features a health system. Falling off a platform will reduce your health, sending you back to the last ground you stood on. Losing all of your health will either result in a game over or send you back to your last checkpoint, which spawns you in "Breaking Point" mode. The IMGC version of Vixie! offers 5 levels, each with a unique tileset.

• Jump your way through several colorful worlds (all connected to the boring world of "real life") of child-like antics.

• A health system tuned to synergize with difficult platformers.

• Wall jump your wall through obstacles

• Interact with the world map! (Some platforming levels are not unlocked until certain interactions are made. Hints are included in a text file within the ZIP, since these parts are reminiscent of Zelda for the NES. Don't give up though. The hints are just there in case the tester gets stuck and tries to write it off as a "gamebreaking" glitch.)

• In a mundane world filled with ordinary objects, Vixie's growing imagination and creativity shape her quest. The worlds she explore are completely based on the games we played and the way we saw the world growing up as children. As Vixie's creativity grows, so does the detail in the levels she travels through.

Hey guys. My name is Richard Shi, but I prefer the handle name "InuKaT" when I'm gaming or involving myself with online communities. I am still a student, and will be entering my senior year soon. I have basic programming knowledge from courses I've taken in the past, and I often create pixel art (though my art skills don't show very well in the IGMC version of Vixie!). I picked up GameMaker: Studio during the summer sale and have been playing around with it until recently. Although I am a complete newbie to programming, I am reluctant to use GameMaker's drag and drop system and opt'd to coding nearly everything.

The Experience (The Process)

I originally didn't plan on making something for the IMGC, but I figured this is a great chance to have a judge sit through my ameteur game and provide me feedback. So I sat down during my lunch break and sketched out a few characters. I tried to "badass" and "edgy" approach, but none really struck me as a great character idea. Then I thought about making a cute character who doesn't use a really big sword and have a tragic backstory. Thus, Vixie was born. She was originally a fat scientist who lost his arm and was looking for a way to "grow" it back by finding pieces of it scattered around the world. His name was Fred. It was gonna be like InuYasha but with an arm instead of Shikon jewel. As you can probably tell, some adjustments were made, and Vixie eventually came to be a young fox girl with an ever-growing imagination.

I didn't have much time to work on it during July due to my placement as a Co-op student, so around 50% of the game was made the week before the contest was ending. This meant one thing: no playtesters. Or, none to test the final version I would hand in to the contest. I ran through the game a few times myself. It's a fairly short game (assuming you don't have to retry a level, and use the hints text file) but it's only the IMGC version. I thought about the range of audience this contest receives when I was deciding the difficulty of the game, so I made it a bit more simpler and easier to play. I just hope that I didn't miss any game breaking glitches during my 3 or 4 runthroughs.

The most difficult part for me was sound and music. Luckily, I found a nice online tool for creating SFX, and Mr. MacLeod's Incompetech website allows for royalty-free commercial usage of his lovely music (provided I credit him appropriately, of course). Despite my limitations, this contest was still a learning experience for me. I would like to thank everyone involved in making the contest possible, and those who motivated me to not be an idiot and be productive.

A commercial version of Vixie! is already being planned. It will be my side project during my senior year. Hopefully my new laptop arrives before the school year commences, as my current tablet PC was already struggling as I developed the IMGC version of Vixie!

Credits (Also included in text file that comes with the game):

Thank you to all the playtesters who tested the prototype of my game. Let me know if you want your name listed!