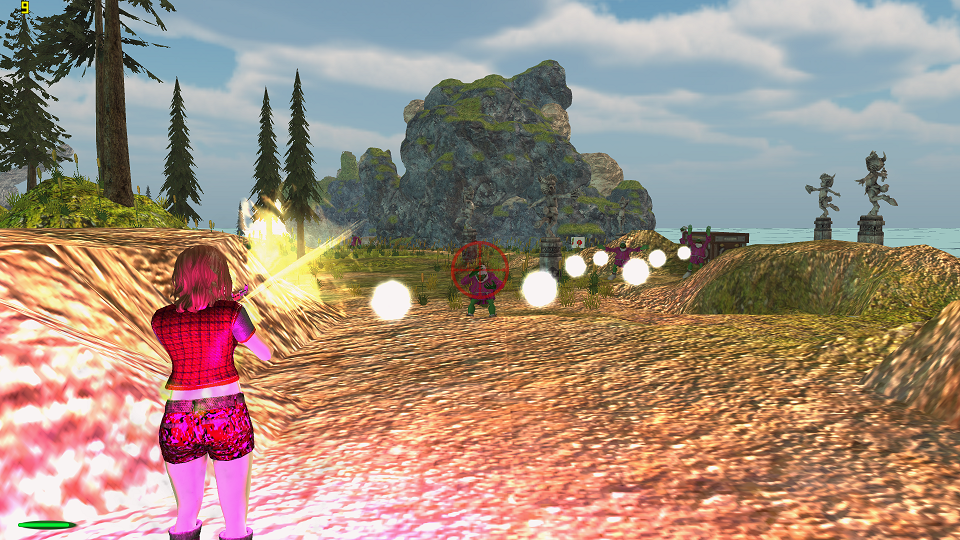 
How did "bullet hell" and "space tourist" ever got together? It's because... N

SPACE TOURIST IS A CRAAAAZY PLOT!

You're Kat Astrovic, a spoiled teenager and daughter of the famous Krap Tasteek.inc CEO. Your bank account makes up for your unsufferable snobish attitude and you just decided to go for some well undeserved vacations on a small planet "full with primitives to study".
Along your faithful (or should we say well-paid) bodyguard Dolph Dudikoff , you head out to this planet to be greeted by some friendly native shamans. Unfortunately, you mistake their greeting grunts for a display of hostility and shoot one of them. The druids retaliate , your bodyguard being knocked off a cliff by the druids defensive spells before starting to harrass you with a true constant bullet-hell!.

Problem : Dolph is your pilot and you don't know how to operate the starship. Grabbing your automatic rifle, you'll start a nonsensical journey under continuous and heavy fire from the angry natives!
Which catastrophe will you cause next? Will you survive? Why do these tall cavern trolls wear such ridiculous outfits? You'll know the answers (maybe) playing this game!

SPACE TOURIST IS SECOND-HAND WEAPONS!!
At Space Tourist dev team, we know what makes a good shooter : the ability to shoot stuff. That's why we provided you with weapons that actually shoot bullets.
You'll be provided the thrill of using a fantastic second-hand AK-47! Pew pew! Boom boom! Arg arg!
You'll also be given a second-hand sniper rifle! Pew pew! But not from too far, it's second-hand material!

SPACE TOURIST IS VOICE ACTING!!
I was having a sore-throat but still decided to deliver some clever lines for you public at the expense of my vocals performance in my noise-core-grindcore second-hand band. It's kind of second-hand voice acting, but without transaction.

SPACE TOURIST IS ENEMIES!!
When we got those awesome second-hand weapons, voice acting and plot we felt there was still something missing. Shortly before the deadline, my team-mate snapped his fingers and told me "What about putting stuff that shoots your hero and that you can shoot?
- You mean enemies?" did I answer because I'm an experienced game designer see?
- Uh..yeah...I guess that's it."
We thought this idea was genius so we ended up creating (second-hand) enemies like the ridiculous swaggy tuning-obsessed cave troll or an ork who looks like being a dna-crossing between Chuck Norris, Dolph Lundgren, some 70's mustache guy and Thrall.
They shoot. A lot.

*cough*....MORE SERIOUSLY
This game is an entry for the Indie Game Making Contest we started a bit in a rush as we heard about this contest only a week after it's beginning. The idea here was to make a kind of "third person shooter/danmaku" even though of course not with patterns as crazy as Touhou on lunatic mind you. It was initially meant to feature 3 maps but thanks to AGF Pro screwing up with the files, we ended up only with one sadly. Facing this problem, we decided to give it a more "old-school arcade" approach, making it with three different skill levels, a score system and the map restarting at a higher skill level when you beat it, allowing some extra challenge. We did our best to optimize it and kill all those creepy bugs which lurk in any game but some minor ones certainly have slept through. The time to finish a run of the map should be around 15 / 20 minutes.
We hope you'll enjoy this short game and vote for our entry in the contest !

Here is an updated link for those interested fixing some technical issues we lacked time to deal with before sadly: https://drive.google.com/open?id=0BwCRJ5LcE7NvV2ZGMnBlQ2FDTjQ
Update features :

Today during my test runs, I reached the score of 95900. If you beat it, send me a screenshot link on the comment section and I shall give you a surprise! :D