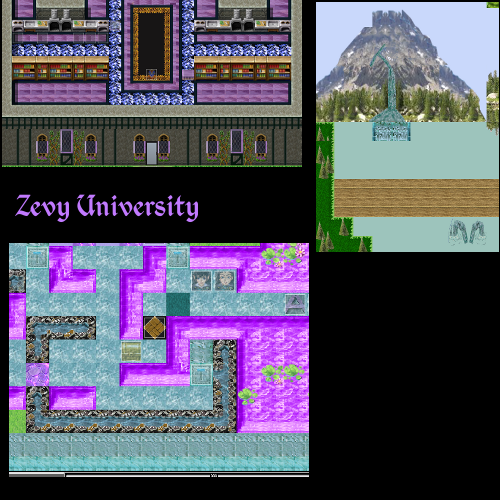 This game is about a student who recieves a letter to go to Zevy University. It is a puzzler game for the geek in all of us. The credits for this game is at the very end, thus most people might not see the credits, unfortunately. I hope to rectify this in future versions by putting the credits first. My gaming making name is Velvela Jade. You will notice in the credits that I barely give myself credit for anything even though all the eventing except a few spots is 100% my own. Thanks to Gryphbear for helping me with those other events.

I wrote all this before, but your website deleted it all and I can't remember what I said!  Thanks!

.ps Having a time limit on a form discriminates against the Disabled. Just saying! Thanks! :D

I lost because you can't get out of the silly house! I have reuploaded the game with this issue fixed but with the rules. He doesnt know why that switch wasn't turned on either! (In about 5 minutes the game should be uploaded. The ONLY thing I did was add in ONE SWITCH so the player can move on with the game and get out of the house. This, in my opinion is AGAINST the rules. Thus I do NOT expect to win anything due to ONE fatal flaw! Thanks!

Update: Please do post any other bugs you find in the comments below. I will be fixing these bugs over the next several weeks.

Alchemy bug: I already know that the last bit of the game is buggy. I'm fixing that over the next several months. I need to get working animations for the Alchemy bit, which will make the entire eventing change most likely. Thanks!

I changed the link so that people can go to my website and get the updated version. I'm fixing all the errors. I've already declared myself ineligible for a prize due to the major game breaking bug that prevents player from getting out of the house at the beginning of the game. ALL errors I've found have been major game breakers. And no, I am not using DB to update my game anymore as we've decided that was the cause of my issues. Thanks!