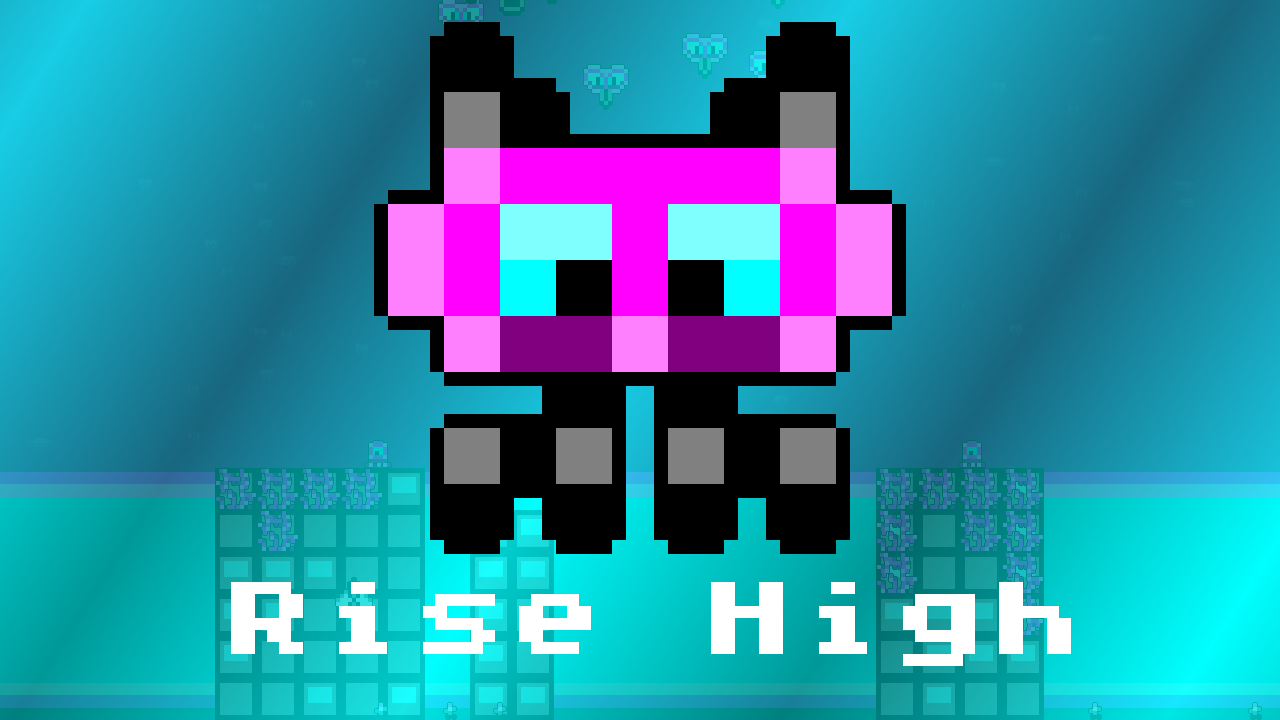 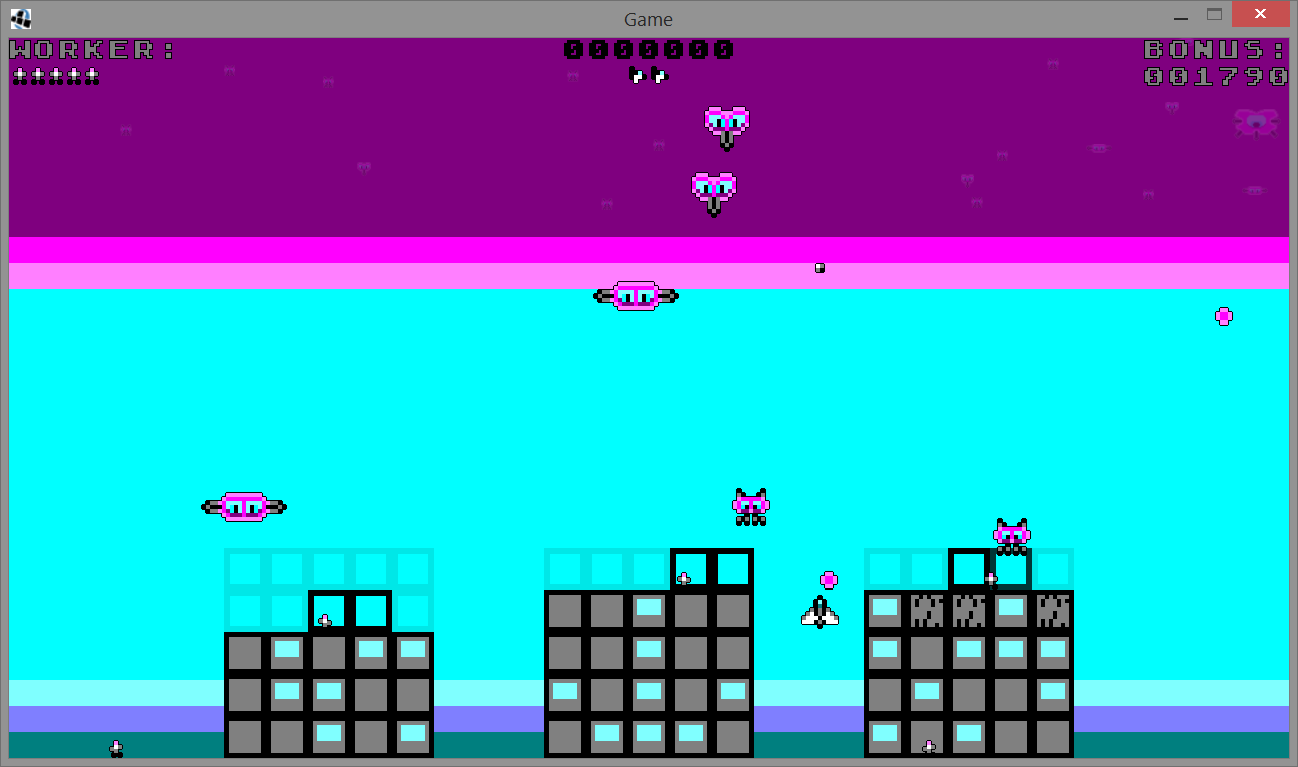 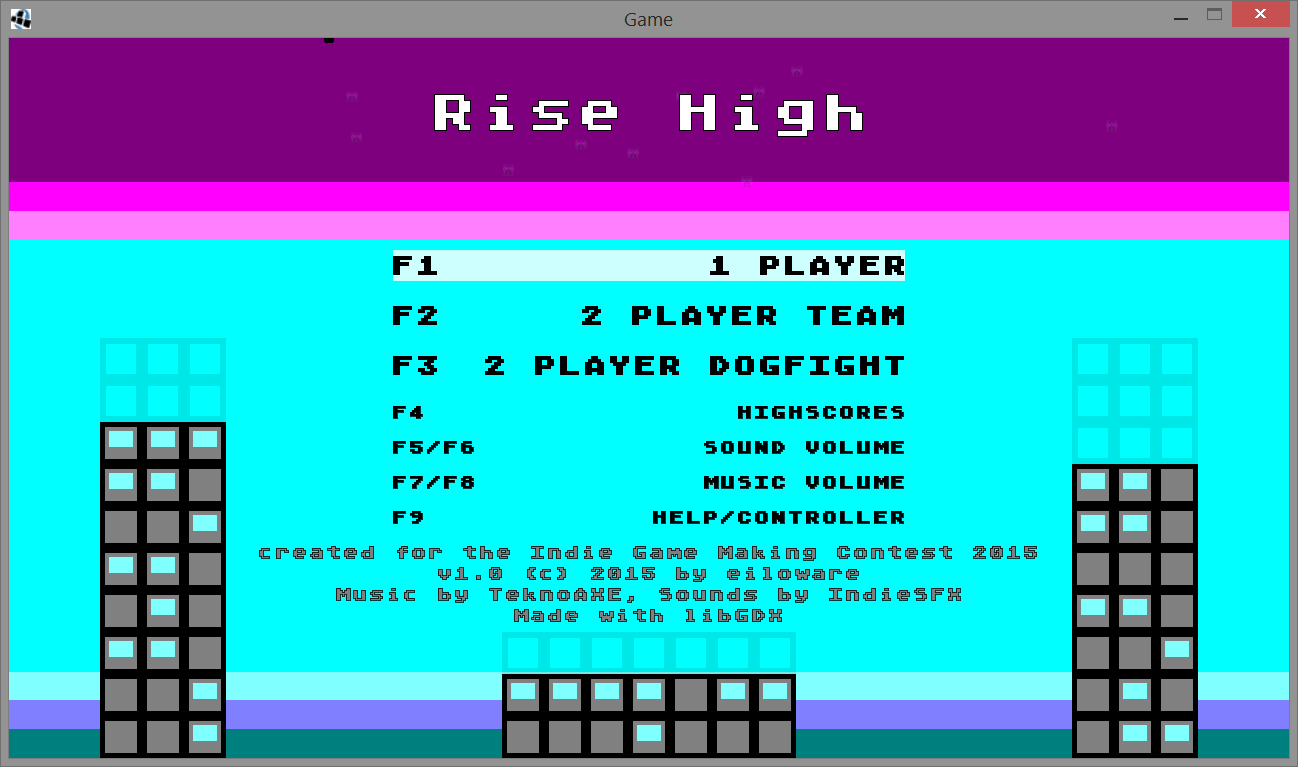 Rise High is an 80s style arcade action game in which you have to protect skyscrapers from alien attackers during their construction. It features 30 levels for one or two players and as a little gimmick a two player dogfight mode. As expected for games of that era, power-ups, bosses and high score lists are included.

In every level you have to finish the construction of the skyscrapers and defeat all the aliens. You have to collect your workers from the ground and place them on the unfinished stories. You have to protect them from abduction (and being eaten) while dodging the attacks of the alien fleet.

Keyboard (Cursor keys + STRG + Shift for Player 1, AWSD + G + H for Player 2)  and controllers are supported. For maximum compatibility the game currently runs on Windows in a window. The game download is a runnable Java jar and should run on any system with a current Jave RE or JDK. A HTML/JS browser version (works fine with Chrome, okay on Firefox and without sound on IE) is available here: Play Rise High. A Fire TV version will follow.

When I read that the theme of the contest is "Growth" I immediately thought of one of the very first computer games I ever played: "Pssst" on my brother's ZX Spektrum more than 30 years ago. In that game you have to protect a growing flower from insects.

Since I did't want to do a straight remake, I thought of other things to protect while growing and came to skyscrapers. And who likes to attack them? Aliens of course

My artist skills are pretty limited I wanted to do pixel graphics and I remembered a game on a friend's C64 with skyscrapers and aliens: "Save New York". So I used this as mental template and to come full circle with my gaming experiences through the 80s I chose a look somewhat reminiscent of the CGA graphics of my dad's 80s era PC. I myself was an Atari fan boy, so at least I chose an old Atari-syle font for the game :-)

For the last few years I used libGDX as a low level API and for easy cross platform debugging (a Fire TV version of Rise High will also be released), so it was the obvious choice for such a short development time frame.

I will write more about the game on my homepage, you can read it here if you like.